See the index page for an alphabetical list of the songs I've recorded plus songbooks and a klezmer tunebook.

Yiddish theater music provided riotously popular entertainment in the early decades of the 20th century, in Europe and America. Hundreds of songs - some wonderful, some just cranked out and shoved out the door - were created every year. After the Holocaust many of these songs were forgotten - the mood of the times no longer favored them.

After fourteen years of conducting the Triangle Jewish Chorale and many years researching lesser-known songs I've transcribed and arranged a lot of rare and wonderful Yiddish music.

I'm a performer of world music and a Yiddish enthusiast. While researching the Mappamundi Cabaret Warsaw project I came upon seven booklets published in Warsaw between the wars. I fell in love with their creator, who I imagine as being a lot like me: quixotically trying to make a living doing things that were, well, more popular then than they are now. 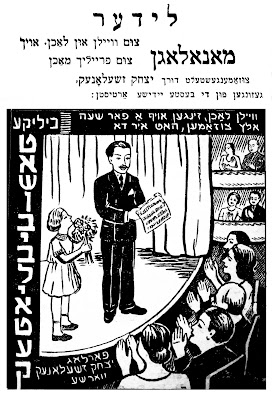 Itsik Zhelonek (Zielonek) was a bookseller and record shop owner in the Jewish quarter of Old Warsaw. I have six of his books of Yiddish folk & theater songs published in 1933 and 1934, with names like The Newest and Most Popular Theater Songs. I also have 35 letste teatr lider fun Sambatiyon un Azazel, published 1929 (Sambatiyon and Azazel were kleynkunst venues - Yiddish cabarets, nightclubs, small theaters). All together, about 130 songs. More than 2 dozen are still lost. If you can point me to any of the lost tunes, you get all the music and mp3s free for all time!

His name is also spelled Icek Zielonek (in Polish) or Yitskhok Zhelonek, or Jicchok or Zieleniec (a location in Poland). I looked him up at jewishgen.org and found among their records an Icek Zielenek born in Warsaw in August 1887 to Moszek Zielenek and wife Chaja nee Rotensztajn, brothers and sisters were Abram, Ginda Ruchla, Isucher Ber, Tauba, Chaim Ida, and Aron. However, delightfully in September 2016 Josh Fogel sent me an entry from the Leksikon fun der nayer yidisher literatur which he's translating one page after another - and here it is: 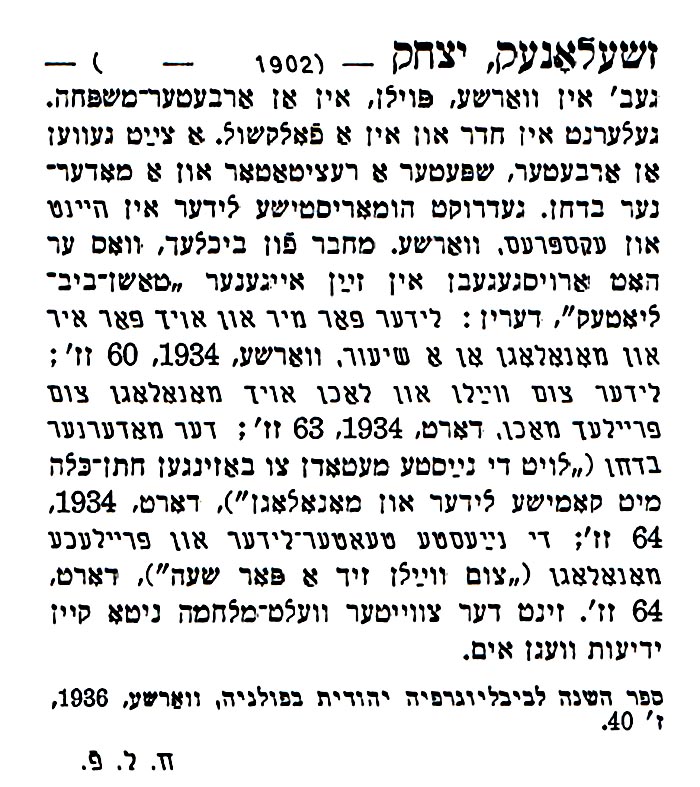 Click here for Fogel's translation. The entry mentions several of the booklets I have, it mentions the tashnbibliotek and says Zhelonek was a modern badkhn, a reciter of poetry, and wrote humorous pieces for Haynt and Expres in Warsaw. He was born in 1902 to a laboring family.

I thank (in no particular order) the following people who have been very helpful in my search:

For more information: contact Jane Peppler.
Find me on Google+